Most of us think of soda as being a 20th century drink. Truth is that is was developed in the 19th Century. Soda Dispensers were put into most pharmacies or drug stores. Below is a link to a complete guide to Soda Dispensers but I've also included a brief section on how to use the soda dispenser. 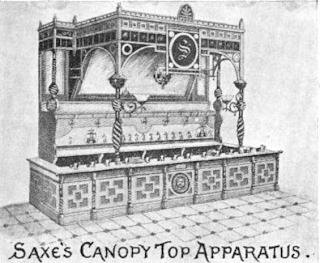 HOW TO DRAW A GLASS OF SODA.
Never allow a green hand to draw a glass of soda for a lady, let him practice first on himself and then on the small boy customer. Almost as much depends on the way a glass of soda is drawn as on the syrups and carbonated water. Always give your customers-a good solid glass of soda, with a liberal allowance of cream, topping off the glass with a fine creamy foam. Never ask customers if they Will have cream, for half of them don’t know whether or not they want it. Give them cream anyway, unless they request you not to, for as a rule it adds 50 per cent. to the quality of the drink. Even at 5 cents a glass you can well afford to give good cream and draw a solid drink. I am speaking of the old reliable flavors, of course, and of Sweet Cream. Not Ice Cream.

HOW TO DRAW A GLASS OF ICE CREAM SODA
Very few dispensers know how to draw a glass of ice cream soda properly. This may seem strange, but nevertheless it is a fact. The usual method is syrup first, ice cream next,'then a little wind and water, that’s all. This makes a very unsatisfactory drink, as it is not properly mixed, and cannot be properly mixed when served in this manner, unless you use a spoon 'and make mush of it. In drinking a glass of soda served as above, Ist you taste wind, 2d plain soda, 3d ice cream, 4th syrup, all separate. This leads the customer to think that your ice cream soda is bad, and he goes out dissatisfied, but had you mixed the drink properly, using the same material, no doubt he would have been well pleased.
I always teach my soda men to draw the syrup first, then turn on the fine soda stream a moment, then the coarse, and again the fine till the glass is about one-half full, and the syrup, is thoroughly mixed with the water, then drop in the ice cream, and top off with the fine stream of soda. In this way you have a glass of soda thoroughly mixed, with the ice cream in the center, floating around, and not adhering to the sides of the glass. Try my way and see if your customers are not better satisfied with the result.