Here's an interesting tidbit I found in McClure's Magazine (1898), a bathing cabinet. Marketed as a Godsend to all Humanity. The advertisement goes on to say:

An inventive genius of Cincinnati, Ohio, has patented and placed on the market a Bath Cabinet that is of great interest to the public, not only the sick and debilitated, but also those enjoying health.
It is a sealed compartment, in which one comfortably rests on a chair and with only the head outside, may have all the invigorating, cleansing and purifying effects of the most luxurious Turkish Bath, hot vapor or medicated vapor baths at home for 3 cents each, with no possibility of taking cold, or in any way weakening the system.
A well-known physician of Topeka, Kansas, E.I. Eaton, M.C. gave up his practice to sell these bath Cabinets, feeling that they were all his patients needed to get well and keep well, as they cured the most obstinate diseases often when his medicine failed, and we understand he has already sold over 600. Another physician of Chicago, Dr. John C. Wright, followed Dr. Eaton's example moved West and devotes his entire time to selling these Cabinets. Many others are doing likewise.
Hundreds of remarkable letters have been written the inventors from those who have used the Cabinet, two of which referring to Rheumatism and La Grippe. 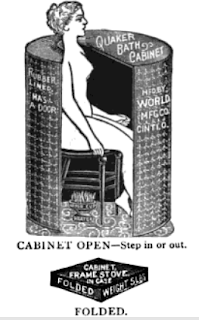 The advertisement is a full page and if you wish to read it in it's entirety here's a link go to page 144.
Posted by Lynn Coleman at 7:00 AM