Today is my birthday and that made me curious about 19th Century birthday parties and celebrations. Below are some tidbits regarding birthdays. Cards were often given during the 19th Century, I saw several advertisements for them but choose not to put copies of them here. Suffice it to say, Birthday Cards are not a new concept.

Child's Party and Invitations
A children's party is by no means a difficult undertaking, nor need it cost very much money, but it makes a child supremely happy. A children's party should be given in the daytime, or if in the evening the early evening hours should be chosen. From four to eight is a very good time to choose. Let the invitation for a birthday party be written either by the child's own hand, or by that of mother or sister. Where a child is old enough to do this for herself or himself, it is very proper to commit the task to him or her. The invitations may be very simple, and, preferably, should be written in the first person; the third person being too formal. They may, however, be written in the third person if the mother prefers this style, as, "Miss Edith Bartley requests the pleasure of Miss Mary Howard's company at a birthday party on Monday, April n, from four to eight o'clock."
When the little children come they may have games and other pleasing entertainment; as, for instance, a story told by an older young lady; forfeits, or anything which presents itself as agreeable to the mother. A peanut hunt or a game of hide-and-seek to find presents, which have been tucked away in different corners, is very interesting. The birthday supper need not be elaborate, but children like to have on such occasions besides the birthday cake, bonbons, mottoes, and what to most little ones is a treat—ice cream. A candy pull is always popular at a birthday party. Should you decide to have this, provide the children with large aprons to wear over their best clothes, so that they will not become spoiled with molasses or flour. Then let them flock into the kitchen, provide them with flour to keep the candy from sticking to their hands, and let them pull at their discretion.
Source: The Art of Home-making in City and Country ©1898

Birthday Social & Invitation
BIRTHDAY SOCIALS.
The following invitation to a birthday social will describe pretty well the plan of the gathering. With these invitations each Endeavorer is to receive a pretty little bag of brightly colored silk, in which he is expected to place as many pennies as he is years old.
Y. P. 5. C. E. Birthday Social.
At the residence of W. H. Putnam, Monday Evening,
February 4, 1895.

This birthday party
Is given to you;
We hope you will come,

And promise, if you do,
An agreeable time,

Some good things to eat,
And, besides many others,

A musical treat.
As we could not secure

The number of candles,
To let your light shine,

We send this fandangle.
Put safely within it

As many round pennies
As years you are old;

We hope you are many!
Your light will be bright

If you send it or bring it,
While we keep it dark,

If you wish, what is in it.
The social committee,

With greetings most hearty,
Feel sure you will come

To your own birthday party I
The entertainment for the birthday socials is to be prepared beforehand. Discover twelve members of the society whose birthdays fall in the twelve months of the year, and get these to write, or get somebody to write for them, poems upon those months, each lauding his as the best month of the twelve. Prepare also songs, one for each of the four seasons, and, if thought best, one tableau as well for each season. In giving this programme, those whose birthdays fall in the spring months will first read their poems, then will come the spring song, and the spring tableau may close the whole; and so with the other seasons. After the poem for each month has been read, those whose birthdays fall in that month will go forward and solemnly present their bags of pennies. You may close with a debate as to the best season in which to have one's birthday!
Source: Social to Save ©1895

Menu for a Birthday Party 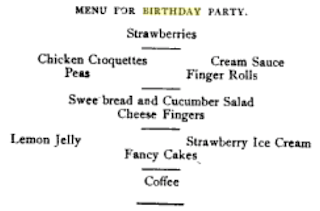 Birthday Cake
And of course what birthday would be complete without Cake? Here's a recipe from Mrs. Owens New Cook Book
The 1-2-3-4 cake or number cake as it is sometimes called, is a good foundation for nearly all cake batters. Combined with chocolate, fruits, nuts and different flavors, it can be utilized for a great variety of cakes. I have found that soda and cream of tartar give better results in this cake than baking powder. The latter seems to dry out more quickly.
1-2-3-4 CAKE.
1 cup butter. 2 cups sugar.
3 cups flour. 4 eggs.
1 cup milk. 1 teaspoon soda.
2 teaspoons cream of tartar.
BIRTHDAY CAKE.

The 1-2-3-4 recipe makes a very nice birthday cake if baked in a dripping pan and heavily frosted. When the frosting is partly dry mark it off in small squares and put half an English walnut meat on each. Place around it a frame work of paste-board cut in little holes for as many small candles as the person is years old. Cover the paste-board with fancy colored paper. Sometimes little candle sticks may be procured that will fasten easily either to frame work or edge of pan. This simplifies matters very much. The lights in the room should be put out and the cake brought in with candles lit and placed before the person whose natal day is being celebrated and he should cut and distribute it.