Tin played an important part in the expansion of the United States during the 19th century. For most of the first half of the century tin was worked by hand. Toward the later part, machines were being used and gradually the Tinmen started to find other trades for income.

Milkpans, spouts, basins, lighting, eating utensils are just a few of the many uses of tin. What made it so practical was it's durability. It could survive the rough roads of the New World.

There's a fair amount of history regarding tinmen and not all of it was good. While researching Corduroy Road to Love, recently rereleased in Blue Ridge Brides, I learned about the tinmen and specifically what happened in the south. To sum it up, the northern tinmen would come down to the south in the spring and summer, selling their wears. They'd return north after they sold all of their wears. Some of the companies had actual salesmen, some were the artists themselves. In the end most overcharged the southern farmers and the tinwear wasn't of great quality. This information became the motivation for my southern boy to come home after learning the trade.

Here's a picture of the a tinsmiths work bench. 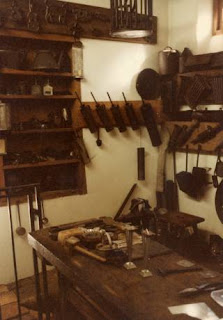