Samuel Morse invented the telegraph in 1837.
In 1838 he developed morse code.
Here's an image of his original code. 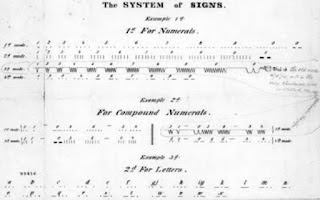 Later this code was altered but only slightly to be International Morse.

May 1, 1844 the first telegraphed news item was sent. The nomination of Henry Clay for the Whig Party.

by 1854 the telegraph transmitter sound was added and the reader now could "hear" the telegraph which changed the system from a paper-based system to acoustic.