Here are some tidbits on various tops and games with tops from our 19th Century.

The peg-top appears to be a modern invention, but the whip-top is of great antiquity, it having been used in remote times by the Grecian boys; it was well known at Rome in the days of Virgil, and in England as early at least as the fourteenth century, when its form was the same as it is now. Strutt, in his "Sports and Pastimes of the People of England," relates the following amusing anecdote of Prince Henry, the eldest son of James I., which he met with in an old manuscript at the British Museum: "The first time that the prince went to the town of Stirling to meet the king, seeing a little without the gate of the town a stack of corn in proportion not unlike to a top wherewith he used to play, he said to some that were with him, 'Lo, there is a goodly top! Whereupon one of them saying, 'Why do vou not play with it then' he answered, 'Set you it up for me aud 1 will play with it.'" 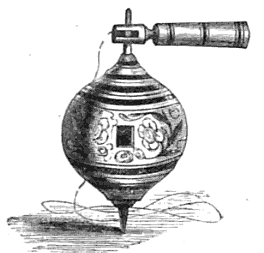 THE HUMMING-TOP.
These cannot easily be made, but can very easily be purchased by those who are so lucky as to have the money. They are made hollo"', having at their crown a peg, round which is wound a string; this, being pulled through a kind of fork, gives motion to the top, and sets it spinning—the fork and the string being left in the spinner's hand In spinning the top, care should he taken to wind the string firmly and eveniy on the peg; and when it is pulled out, neither too much nor too little force should be used, and a firm axil steady hanu should be employed, while the top should be held in a perpendicular position. The string should be drawn with a steadily increasing force, or the top will not hum properly.

PEG-TOP.
There are various kinds of Peg-tops, and they also vary in shape, some being much rounder than others. Those are the best which are shaped like a pear. There is also great variety as regards the shape and size of the peg, which in some tops is short and thick, in others long and tapering. Again, tops are made of different kinds of": wood, some being made of deal, others of elm, some of yew-tree, and others of boxwood. These last are the Boxers so highly prized. Some of the vcr» best tops are made of lignum vitae, with long, handsome pegs. 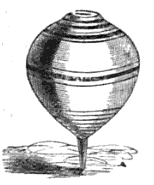 SPANISH PEG-TOP.
The Spanish peg-top is made of mahogany. It is shaped soir.e wliat like a pear; instead of a sharp iron peg, it has a small rounded knob at the end. As it spins for a much longer time than the English peg-top, and does not require to be thrown with any degree of force in order to set it up, it is pxtrcmely well adapted for playing on flooring or pavement.

THE WHIP-TOP.
Whip-top is a capital sport when played by two persons; and it played by first whirling the top into motion by turning it sharolv with both hands, and then by flogging it till its motion becomes very rapid. When two persons play whip-top, the object should be for each to whip his top to a certain goal, he wiio reaches it first being the victor.

CHIP-STONE.
This game is played by two boys, in the following manner: Two lines, about six lect apart, are marked upon the ground, which ought to be smooth and hard. Some small stones are then procured and placed midway between the lines; they should not be larger than a small bean, and the black and polished ones are the most sought after. The tops arc now set up spinning on the ground, and the players, being each provided with a small wooden spoon, dexterously introduce them under the pegs of the spinning tops, and then, with the top still spinning in the spoon, throw the point of-ihe peg against the stone, so as to chip it out of bounds; he who docs this the soonest being the victor. While the top continues to spin, he may take it up with the spoon as many times as he can, and when it spins out he must again wind up, pursuing the same plan till he " chips out."

Directions.—In winding up the top do not wet the end of the line too much, and take care to lay it closely and evenly within the grooves. In throwing the top from vou, the line must be pulled in with a peculiar jerk of the hand, which practice alone can give. The string button should be held close in the hand, between the last two fingers of the hand. There is what is called an "underhand" way of spinning a top, i.e. by holding it peg downwards, throwing it in a straight line forward, and withdrawing the string; but as we dislik ■ everything underhand, we shall not recommend this practice anymore than we shall the Spanish tops, which are spun after this method.

This game may be played by any number of boys. A ring about a yard in diameter is first marked on the ground, and another ring sunounding the first, and at a yard's distance from it, is also marked. The players must stand on this ring, and from it throw their tops. One player begins by throwing his top spinning into the ring, anil while it is there spinning the other players are at liberty to peg at it as quickly as they can. If none of them hit it while it is spinning, and if it rolls out of the ring, the owner is allowed to take it up, and having wound it, to peg at the others which may be still spinning in the circle. Should any of the tops, when they cease spinning, fall within the ring, they are considered dead, and arc placed in the centre of the circle for the others to peg at. The player who succeeds in striking any of the tops out of the circle claims those so struck out. In some places each player may ransom his top with a marble.

Sleeping tops are exposed to much danger in the play, for they offer a fair mark to the "peggcr," and often get split, when the "peg" is taken by the splitter as his trophy. Long-pegged tops are the best for the game, for they lie more upon their sides after their fall, and, before the spinning entirely ceases, are the more likely to spin out of the ring.
There is a way of making the top spring out of the ring directly it has touched the ground. Only long-pegged tops will execute this feat. It is done by drawing the hand sharply towards the body jusl as the top leaves the string. When the manoeuvre is well executed, the top will drive any opponent that it strikes entirely out of the ring, while it does not remain within the dangerous circle itself for Ciore than a few seconds.

There are some out-door games played with toys which do not fan under any of our previous headings. These games we now lay before our reader, together with a description of the toys in common.
Source: Every Boy's Book ©1881