Below you will find the floor plans for the 1896 Six Room City Cottage and the article written by a fellow concerned about some aspects of the plan. I've chosen to add these comments because it might give you as the author some information as to what your characters might be concerned about with regard to their home or the one they hope to build. Also, I've chosen these plans because you'll see the use of closets, bathrooms and a 19th Century modern kitchen. Another fun fact is these are the basic plans of the house my husband and I rented when he was a college student. The differences were that ours was a duplex (so it was double this floor plan for the entire house) and the right side was the left side in our portion of the duplex. It was a great old house and we have a lot of memories from living there. 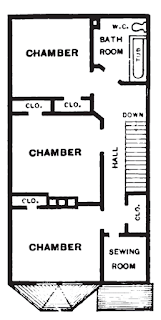 Six-Boom Cottage for a City Lot.
From N. H. D., Newburg, N. Y.--I am an interested reader of the paper and in studying the plans of workingman’s cottages published from time to time I find some very good points, but the fault with the majority of the plans is that there is no stair hall proper for the two-story portion or else it starts in a cramped section of the building. The floor plan submitted by “ R. _B.” of Meriden, Conn, and published in the September issue is, in my opinion, very convenient. The shape of the bathroom as well as its location is exceedingly odd, as it cuts otf the square angles of the “kitchen and the two bedrooms, but necessitates two doors more than are necessary. The family bedroom is at the rear of the house, and I should like to inquire how the correspondent proposes to warm it. The sink is too far from the stove and the small room marked “entry " at the front of the house is of no use whatever. Another fault is that the cottage takes too much ground for the frontage. This is the fault I find with most of the plans submitted. They cannot be erected on a common city lot of a frontage of 25 feet, and it is well known that in the city a lot 25 feet front will cost anywhere from $200 upward. A house for such a lot is, in my opinion. the best for the workingman. I send herewith the floor plans for a two-story frame cottage. which I consider well adapted for a 25-foot lot. It can be built in a good manner for about $1000 and possibly less. It can. however, be made to cost more, according to the finish inside and out. The frontage is such that by building from 18 inches to 2 feet from the line on one side light are placed under the cables. and a composition consisting principally of plaster of paris and wood chips is poured on, the cables, thus being imbedded in the concrete mixture, which solidifies in a few minutes. The vertical part of the concrete inclosing the floor beams is supported by wire netting passed around the flanges of the beam. If a flat ceiling is required, iron bars are laid acrOsS the bottom would be given to the dining room and bedroom over it, and at the same time there would be a nice passageway to reach the rear of the house and yard. Again, no one could block the light and air from that side. The parlor has a bay window with arch and the dining room has two windows. The kitchen, it will be noticed from an inspection of the plans, may be entered from both hall and dining room, this arrangement giving direct communication between the kitchen and the front door. The pantry is conveniently located to both rooms, while the entry tends to keep the cold air from the kitchen in the winter. The sink is placed near the stove and is convenient for hot and cold water. On the second floor are three good sized sleeping rooms. a sewing room, four closets and a bathroom. The arrangement is such that the sleeping rooms and bathroom can be heated by stoves or other means as may be most convenient. The bathroom is so located that a direct connection is had for water and waste pipes from the sink in the kitchen. The plans show the position of the closets with regard to the
Posted by Lynn Coleman at 7:00 AM