Here's a little tidbit with two illustrations that I thought was interesting. Mainly because they call the hand cart a wheel barrow. However it is always interesting to read what people find curious about visiting another culture. This comes from the The Phrenological Journal and Life Illustrated ©1873

The wheel-barrows are usually provided with a cushion for the passenger to sit on. This generally extends over the frame which protects the wheel, and can be removed if boxes and bales are required to be carried in place of passengers. A kind of rope stirrup is generally attached to each side of the cart, which hangs down near the ground. The outside foot of the passenger can be readily inserted in this stirrup, while the other is curled up under him, in case he does not prefer to sit with his back against the frame which protects the wheel, with both feet dangling down on the outside. The wheel-barrow man has a rope or band which he puts over his shoulders, and hooks on to the end of the wheel-barrow handles. In this way the weight which otherwise would have to be sustained by his arms and bands is sustained by the strap or rope.
consists in having the weight to be carried come by the sides of the wheel, and not between the wheel and the man working it. The weight is so disposed that only a small part of it is lifted by the man in wheeling. With the Western wheel-barrow, oftentimes half, or more than half, of the strength of the man is employed in lifting the load, but in the case of the Chinaman with bis wheel-barrow, he employs his strength mostly in pushing and propelling his load.
An ingenious mechanic, from these pictures and suggestions, could doubtless manufacture an improved wheel-barrow which would be much more fitted to the transportation of boxes, packages, stone, sand, etc., than the one now in general use in the United States, enabling the barrow-man to wheel two or three times as much weight as now and with less fatigue. At Tientsin, when dirt and pebbles or refuse are to be transported, the wheel-barrow is provided with two or more oblong baskets, which are snugly packed alongside of the wheel.
Carrying Packages 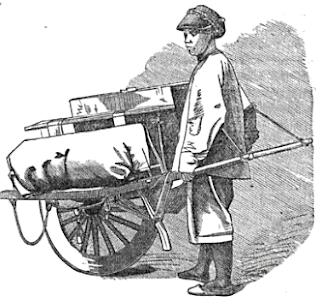 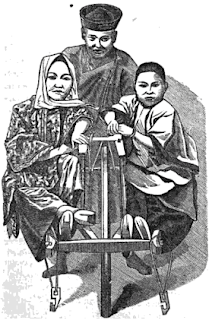